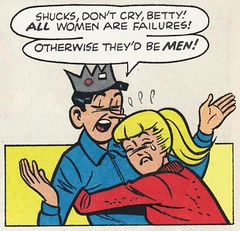 Consolation, Jughead Style
Originally uploaded by Devlin Thompson
When you've been reading comics (and reading about comics) as long as I have, you end up with a lot of obscure knowledge kicking around in your head. I find it's always nice to share that knowledge (but be humble and don't try to sound like a know-it-all). Here's some examples:

Over on Comics Should Be Good!, Brian Cronan posted a great article about Jughead's various girlfriends over the years (for a self-proclaimed "woman hater," he's had a lot). In the comments, some people started asking questions about Jughead's hat, so I made this comment about what kind of hat Jughead wears. Then a week later, Brian Cronan does an article about Jughead's hat, and he come to the exact same conclusions I did, and he even gives me a shout out, even though he hadn't read my comment when he wrote his article.

Another of my favorite trivia nuggets is what the 'S' on Jughead's shirt stands for. Well, in the comments of the Jughead's hat article, J. Morgan Neal links to an almost-20-years-old article about Archie and friends in Entertainment Weekly. And that article gives the same explanation for Jughead's 'S' that I've been giving all these years! So it's nice to have verification...

Oh, you want to know what the 'S' stands for? Here's the quote from EW:
[Archie creator' Bob] Montana's widow [Peg Bertholet] is working on a book, The Golden Years of Newspaper Comics, that will clear up some mysteries about Riverdale, such as the meaning of the letter S on Jughead's shirt. The people at Archie headquarters in Mamaroneck, N.Y., aren't saying what that S stands for, but Bertholet will. ''Jughead's S refers to a place called Skunk Hill in Haverhill, which Bob turned into Squirrel Hill.'' Bob's elementary school near Haverhill called its athletic teams the Tigers. ''So,'' Bertholet concludes, ''Jughead's S meant 'Squirrel Hill Independent Tigers,' and you couldn't abbreviate it any other way.'' Jughead, the seer who never opens his eyes, voices his indifference to society in the silent, not-quite-scatological cryptogram on his shirt. He's a letterman in the sport of rebellion.
So Jughead has an 'S' on his shirt because he knows it really stands for 'SHIT'. I love that story!
Tags: betty, bob montana, flickr, j. morgan neal, jughead, links
Subscribe