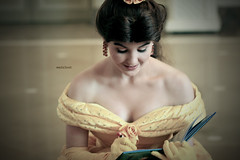 Untitled
Originally uploaded by ًWeda3eah*
I'm way behind on blogging about movies I have seen. So I'll be catching up here over the next few days. And I probably won't actually be saying much about them movies, because they are gone from the theaters now...

But I will say I thought the 3D conversion was really well done in Beauty and the Beast. We didn't go see The Lion King in 3D, so I hadn't seen the process before. There were one or two glitches which I am pretty sure were caused by the original animators cheating on perspective, etc. (which is totally OK when you're making a 2D movie).

There is also a flaw in the movie that I had never noticed before, but Beth noticed right away the first time she watched, and now that she's told me I can totally see it too. In the song "Belle (Bonjour)" (Belle's "I want" song), she sings about how she wants adventure, but she also wants travel and to escape her provincial life. Well, in the film she gets lots of adventure, but she doesn't get any travel, and at the end of the move there doesn't seem to be the promise of any either. In fact, in the film the Beast gives her a library as a substitute for travel, and she kinda accepts it. (Of course, at that point she was a hostage and didn't have much choice.) But still, why bring it up in the song if nothing is going to be done about it?