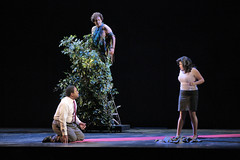 RUSALKA
Originally uploaded by djddawg777
In a recent press release, Archie Comics refers to their Sonic the Hedgehog comic book as "the longest running continuously published licensed comic of all time", at 225 issues.  Really, Archie?  Off the top of my head, Walt Disney's Comics and Stories ran 263 issues at Dell without any breaks, and I would consider the Gold Key/Whitman issues to be part of the same run, so that goes to issue 499 (Whitman actually went to 510, but 499 was the last monthly issue before Whitman's distribution problems lead them to start publishing irregularly).  And I don't know if that's the longest, it's just the first one I thought of...

Archie also says Sonic is "longest running video game inspired comic".  I have no objection to that.  I also note that the Guinness Book of World Records apparently agrees with this claim, but is silent on the first claim...