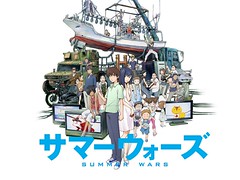 Summer Wars
Originally uploaded by Asobi Masho
I usually blog about all the movies I've seen, but I seem to have fallen behind. So here's an attempt to catch up:

Tron: Legacy: I saw this twice, mostly by accident (the people I was with wanted to see it). It's not bad, but you can't help thinking it could be be more imaginative. The little people living inside your computer should be weirder.

Summer Wars: This is a fun movie which I would gladly see twice! It shares some themes with Tron, and handles them more deftly.

The Green Hornet: Much better than I expected. Green Hornet and Kato bumble thru the story and it somehow works out. I agree with pretty much said about the movie in this link...

The Illusionist: Not a bad little movie, but it failed every time it tried to be funny  -- it was usually trying to be wistful or introspective or even sad, and it succeeded at all of those, but then it would have a slapstick sequence that was clearly supposed to be hilarious, but wasn't. I'm not sure it deserves the third slot for the Oscar -- I would have rather seen Tangled or Summer Wars nominated.

OK, now I am current!

Recent articles I added to Wikipedia:
Nature of the Beast
Relative Chaos