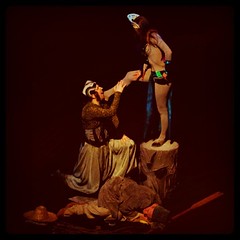 Rusalka
Originally uploaded by AshikCygan
Saturday night, Beth and I had our big Valentine's night out. We saw Rusalka at OperaColorado. It's a Czech-language opera by Antonín Dvořák. And what's it about?

A rusalka is female river spirit in Slavic mythology that come to the shore at night, mesmerizes handsome men, and leads them into the river to drown.  But the opera is about a friendly water sprite named Rusalka.  She fall in love with a human prince, goes to a witch to become human, the deal has lots of conditions, one thing leads to another, and by the end of the show (Spoiler Alert, even though operas don't really have spoilers) Rusalka has become a rusalka, and her first victim is her prince! It's appropriately tragic, and has lots of similarities with Hans Christian Andersen's The Little Mermaid, which the program explains as the two stories coming from the same folkloric background, but I'm pretty sure Andersen wasn't a folklorist and made all his stories up. The Little Mermaid is from 1837 and Rusalka's libretto was written in 1899, so it is completely possible that The Little Mermaid was absorbed into folklore for Jaroslav Kvapil (the librettist) to find it there in the 60 years between the stories...

The production was striking, with minimal sets that are brought to life with video projectors and lighting. The singing was all very beautiful, and all the singers played their parts well -- except the Prince, who didn't really come across as the kind of guy you would leave your underwater family for. It plays a few more times this month, so I recommend it if you get a chance...

Recent articles I added to Wikipedia:
I Do, They Don't
Rent Control (2005 film)
Collapse