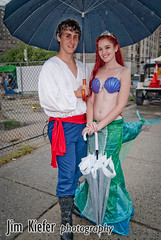 JD2_7477
Originally uploaded by kieferman
Here's something I used to do on Usenet, and I'm bringing it back.  My audience is smaller now, so I'll try and promote this somehow, because I want to hear what lots of people think...

The 196O's were the heyday of the TV show tie-in comic book.  And even though many companies produced TV tie-ins, the clear leader was Gold Key/Western.  And their general rule was to wait until a TV show made it into it's second season before licensing it, because then the show had a proven track record.*  Sure, this meant that sometimes another publisher (like Western's former partner Dell) might steal a hit away from them, but it usually worked out.

The TV networks had their upfronts this week, so now we know which shows are coming back next season.  So what I'm going to do is list all the returning fiction shows (on the major networks) that haven't been adapted to comics yet, and you can chime in and say which ones you would like to see as comic books, or that you would think would make a good comic book... (The list is broken down by network, simply to organize it a bit.)

My picks? Most of the TV shows I like have a tight continuity, and I'm not sure how you would fit a comic book in.  The Big Bang Theory would work well.  And it surprising that they haven't tried Family Guy yet!

*There are many exceptions to this rule, where Western started the comic in the first season.  Believe me, I heard about all of them when I posted on Usenet.  But they were all shows with obvious "kid appeal", so you can see why Western would take a chance on them...