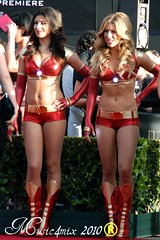 Iron Man 2 Promotional Dancers
Originally uploaded by Music4mix
We saw Iron Man 2 on Saturday (we had planned on seeing it the weekend before, but we couldn't fit it in).  I liked it bunches.  It has a few flaws (Gwenth Paltrow's wooden acting is one, and the whole sequence where Tony makes a new element is comic book-y in the worst way), but on the whole it is very enjoyable.  I thought Micky Rourke's character was a great way to reference all the Soviet villians Iron Man had in the 60's & 70's without actually using any of those now-dated characters.  And I get a kick out of Agent Phil Coulson -- have they brought him into the comics yet?

Here's a good review that I think explains why some critics didn't "get" the movie.