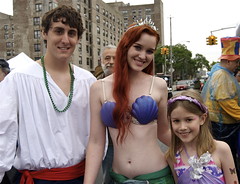 Triumph!
Originally uploaded by kizzzbeth
I've seen How to Train Your Dragon twice now, and I haven't written about it yet... as you may guess, I liked it!  It's just really well done, without a lot of the annoying "hip" touches that Dreamworks likes to add to their movies.  The second time, we saw it with my nieces and they liked it too.  Although, the second time it wasn't bright enough -- the projectionist didn't turn up the light enough to compensate for the audience basically wearing sunglasses...

I was always excited to see this movie because it's from Chris Sanders & Dean DeBlois, the directors of Lilo & Stitch.  (And you can tell, because Toothless looks a little Stitch-like.)  I like how Hiccup does what he does not because he's smarter (or stronger or more nimble etc.)  than the other Vikings, but because he is able to show empathy.