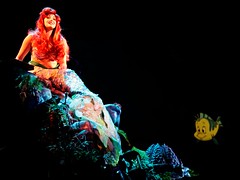 The Little Mermaid
Originally uploaded by abelle2
Turns out there is not a way to import MySpace contacts into Facebook.  There used to be, but is hasn't been updated in several years.  So last night, I spent some time doing it manually (just the friends who had their real names listed in MySpace).  Does this mean I don't need to go into MySpace ever again?  Well, it's not like I ever went more than once a month anyway, so I'll probably still check in from time to time...