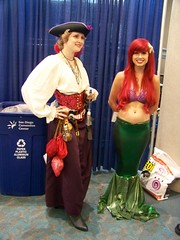 Pirate and Ariel at San Diego Comic-Con International
Originally uploaded by Loren Javier
Just has a busy weekend.  We bought our niece Emma tickets to Mary Poppins for her birthday back in October, and Saturday was the day!  In the five months since Emma's birthday her whole family (father. mother, sister, aunt, uncle, cousin, grandma and grandpa) decided to come too, but they had to sit elsewhere since they bought their tickets later.  Before the show, we ate at Rock Bottom, and while we were eating the St. Patrick's Day Parade ended, so a bagpipe band who apparently wanted to parade some more came into the restaurant and paraded between the tables single file.  That was a surprise!

After the show, Emma and Allie (her little sister) and Jack (her dad and my brother) and Angie (her mom) stayed overnight with us, and Angie and Beth went out to a bachelorette party for Angie's cousin, so Jack and I hung out with the girls and ate pizza and watched The Chipmunk Adventure.  The next day, we went to Jack-n-Grill for breakfast, and then went furniture shopping...