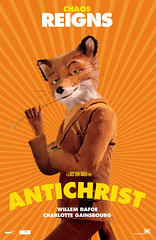 Antichrist alternate poster
Originally uploaded by SamsMyth
Beth and I saw The Princess and the Frog and Fantastic Mr. Fox way back on the 13th and 14th. That's way too long ago to really write reviews, but I can say I really liked Princess!  It's fun and lively and the animation is really good (I especially liked Dr. Facilier's shadow and the "Almost There" sequence).  The story avoids some formula (but fall right into others) and isn't just a retread of earlier Disney flicks.  The music isn't very memorable, but the musical numbers are done well enough to overcome that.

As much as I liked Princess, I liked Fox more.  It's just  -- I don't know what it is, really.  I think I need to see it again before I can explain what I liked so much.  Highly recommended...