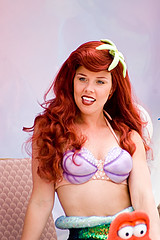 Mar 19 2007 090
Originally uploaded by timeless_toys
So, what's up? I've been writing some half-assed entries recently, but here's something a little more meaty -- Beth and I are going to New York City this weekend to catch some shows! We bought a weekend package deal from the NFFC, and so we are going to the 2008 NFFC on Broadway Weekend! We will see The Little Mermaid on Saturday and Mary Poppins on Sunday, and some sort of backstage event afterward on both days! If that's not enough, we have tickets for the Statue of Liberty on Monday, and we may meet up with friends who live in the city in the evenings.

We leave Friday morning, so I'll be away from blogging again, but not for very long. The Seven Year Itch was on TV not too long ago, so now I'm wondering if we are crazy for going to New York in August, but I understand they have air conditioning now so it shouldn't be too bad...
Collapse