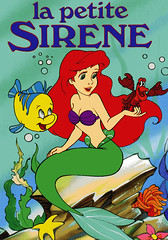 La petite sirène
Originally uploaded by Alice W...
I was looking at the new Disney pins on PinPics, and I found this button a McCain supporter made. Forget the slander on Obama (he's a big presidential candidate, he can take it), what's up with Osama the Pooh there? What the point of that? Does this person really like Winnie The Pooh so much that he just had to include him, or does he hate Winnie the Pooh and want to slander the bear some too? Or is there some point behind comparing Pooh and Osama that I'm not getting here?
Collapse